My Experience at the 2018 Women’s March in NYC

I was so excited to attend the Women’s March last week in NYC! This was the 2nd Women’s March but it was my first time going! I went because I wanted to be able to stand up against inequality and let my voice be heard!

The march started at 11am and we were going to march from 72nd street to 42nd street- Bryant Park. My mom and I took the the path train to 33rd street because we came from New Jersey, and then we caught the R train to 42nd street so we can transfer to the #1 train. Going on the train from 42nd street to the upper west side of New York City was an event itself! I saw nothing but women, men, and children with pink hats, pink apparel, and creative posters. We were packed like sardines in the train station and pink took over the whole area. When the #1 train came, it was already packed with people who were also attending the march, but more people insisted on squeezing on the train anyway. My mom and I decided to wait for the next one. The next #1 train came, it was still packed and crowded, but this time my mom and I, along with other people, insisted on getting onto this train. On the train, there was no room to move. It was also hard to get off the train once you were on and stuck in the middle, surrounded by multiple bodies on every side of you. Because there were so many people, my mom and I decided that we were just going to get off on 66th street instead of 72nd street and just walk up.

Once the train reached reached 66th street, my mom and I had to push our way through just to get off the train. Clearly, we weren’t the only women march attendees who decided to get off at 66th street because many other people in their pink apparel rushed off the train as well. Getting out of the train station was a breath of fresh air, literally. It was beautiful weather for a march, it didn’t feel like winter at all. There was already a crowd on 66th street and Broadway walking to 72nd street and Central Park West, so my mom and I went behind them. Even if we wanted to, we wouldn’t have been able to go around the crowd because the police blocked off many streets, which made it difficult to get to the entrance of the march. 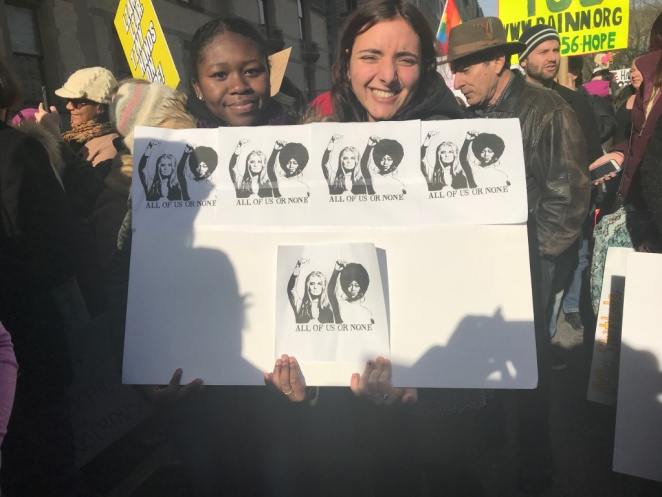 In the beginning of the march, it was a lot of waiting. We didn’t move for the first 2 hours. It was still fun because the crowd shouted chants and right where I was standing there was a band. They made a variety of different beats and we turned our chants into songs and we danced. It was truly a moment of being united. There were women there, men and children there, and even dogs were there! It didn’t matter what your race or your sex was, everyone was there to stand up for something.

As we started moving, the band and the chants continued. There were people in buildings that shouted and cheered us on from their windows. Posters were raised high for everyone to see. People walked proudly with their heads high and their friends/ family members by their side. We marched as a community!

Some of my favorite posters were the following:

I want to give a big thanks to the ladies behind the Women’s March, Teresa Shook, Vanessa Wruble, Tamika D. Mallory, Carmen Perez, Bob Bland, and Linda Sansour. They took the initiative to fight and made this march a nationwide event. I marched for racial equality, women’s rights, immigration reform, and more! I look forward to going again next year and I hope you Beauties decide to go to!!

Happy Sunday Beauties!!!💜 #girlswithbeautyandbrains
Congratulations to Zaila Avant-Garde who made history at the 2021 Scripps National Spelling Bee! She is the first African American to win that spelling bee!!! #girlswithbeautyandbrains 💜
THIS 👏🏾👏🏾👏🏾
For anyone who needed this reminder!! #girlswithbeautyandbrains
#PrideMonth - Miss Major Griffin-Gracy is a transgender activist and community leader for trans rights specially focusing on women of color. She served as the original Executive Director for the Transgender Gender Variant Intersex Justice Project, which aims to assist transgender persons, who are disproportionately incarcerated under the prison-industrial complex.
#PrideMonth - Aaron Philip is the first Black, transgender, and physical disabled model to ever be represented by a major modeling agency!
Loading Comments...
Comment
×
%d bloggers like this: